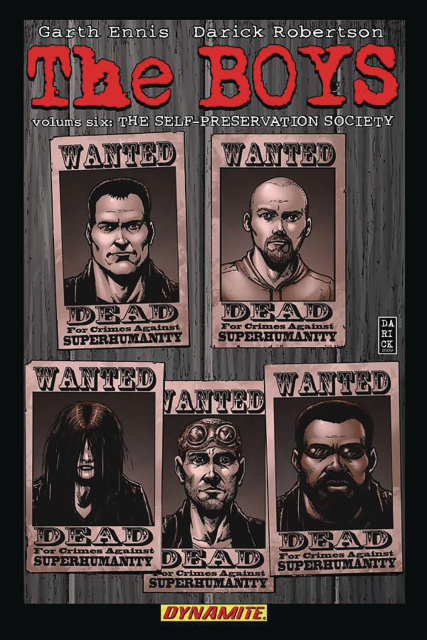 Featuring an introduction by Lost creator Damon Lindelof! It had to happen sooner or later: the supes get mad enough to go after the Boys. One of the world's most powerful superteams decides to hit our heroes, all guns blazing, and the Female is the first to fall into their lethal trap. Meanwhile, Hughie is still plagued with doubt, and Annie finds herself on the receiving end of the worst new look ever- in THE SELF-PRESERVATION SOCIETY by Ennis and Carlos Ezquerra!

Plus, The Boys origins...

Issue #35/36: Origins time. In the first of the two part "Nothing Like It In The World", Mother's Milk tells Hughie the story of his life to date- his upbringing in Harlem, the secret of his massive strength, the catastrophe that struck his family, and the unforgettable boxing championship disaster that led him to join The Boys.

Issue #37: High in the French Pyrenees lies the little mountain village of Franglais, as quiet and peaceful a place as you could imagine... until her favorite son comes home. The Frenchman's origin is finally revealed, in a pulse-bounding tale of seething passion, vile betrayal and classic Gallic melancholy. Who is Black Pierre? Why is the lovely Marie not there to welcome her beloved Frenchie home? And how can one croissant change everything?

Issue #38: The Female of the species is more deadly than the male, according to the poem- just how deadly is revealed in the secret origin of the Boys' most mysterious member. The dawn of nuclear warfare, rumours of mutant Japanese monsters from the ocean, a subscription to Marie Claire- all this and more in "The Instant White Hot Wild".