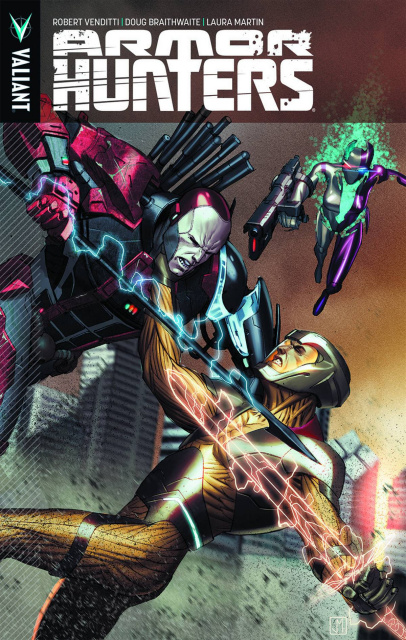 EARTH WILL BE THE GREATEST HUNT OF ALL!

When Aric of Dacia returned to Earth with the stolen X-O Manowar armor of an alien race, he thought he'd finally found a weapon to guard the peace and kingdom he'd struggled so long to secure. But now, a relentless and surgical strike team from the farthest reaches of space - sworn to exterminate the armor and all like it - have found their fi nal target. The ARMOR HUNTERS are coming. They will hunt. They will trap. They will kill. And they will rid the universe of the X-O Manowar armor's incalculable destructive power...even if it means taking the Earth with it. In the tradition of the universe-shaking HARBINGER WARS, be here when New York Times bestselling writer Robert Venditti (X-O Manowar, Green Lantern) and superstar artist Doug Braithwaite (Unity, Justice) launch Valiant's biggest heroes into the year's blockbuster crossover event - ARMOR HUNTERS! Collecting ARMOR HUNTERS #1-4 and ARMOR HUNTERS: AFTERMATH #1.