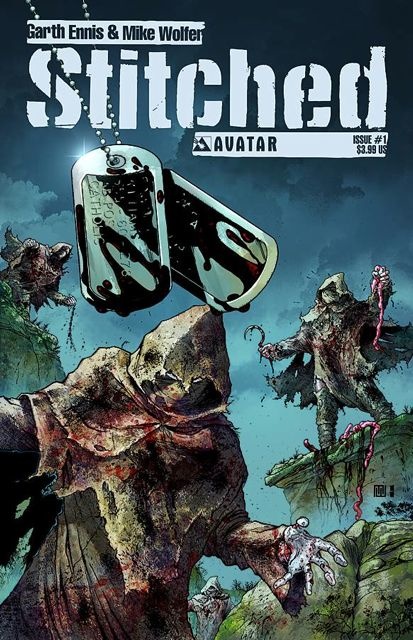 Garth Ennis and Mike Wolfer unleash the biggest horror series of the year! From the mind of Garth Ennis comes the modern chapter of an ancient horror. Ripped straight from the debut of his first-ever writing/directing effort comes the ongoing comic book continuation of the acclaimed short film, Stitched! The three survivors of an American military helicopter crash discover that there is something even more deadly than the Taliban controlled countryside they find themselves trapped in. Garth Ennis weaves a tale that combines today's headlines with his trademark vision of the supernatural into a modern horror masterpiece. Supported by the largest promotional campaign Avatar has ever done, this new on-going series is certain to appeal to Ennis' legions of fans as it pushes the envelope of horror beyond the boundaries of sanity and into fresh nightmares. Stitched #1 is available with a Regular cover, Wraparound cover, and Gore cover by series artist Mike Wolfer, and a special Stitched Movie Photo cover retailer incentive cover.