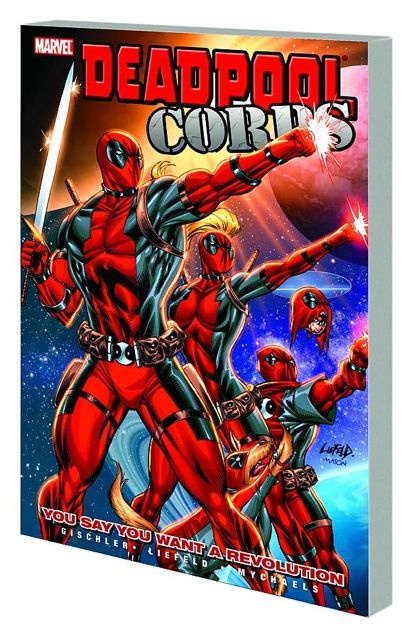 Deadpool Corps Vol. 2: You Say You Want A Revolution

How many Deadpools does it take to destroy an alien world? Fresh from inexplicably saving the galaxy, the Deadpool Corps is offered a mission by the Omega Confederation to squash a rebellion by the Krook people that is derailing the company's mining operation. Naturally, the Confederation is a little miffed upon learning the Corps has changed sides! Deadpool tries to modernize the Krook society so the people can defend themselves from invasion, at the same time attempting to win Princess Teela's affections. But her father, the king, challenges Deadpool's rise to power and his kingdom's industrialization. Leave it to Wade Wilson to incite a civil war. Father fights daughter, brother battles brother, and Lady Deadpool duels Deadpool! Will Wade and friends make it out alive, or will their meddling destroy the entire planet? Collecting DEADPOOL CORPS #7-12.