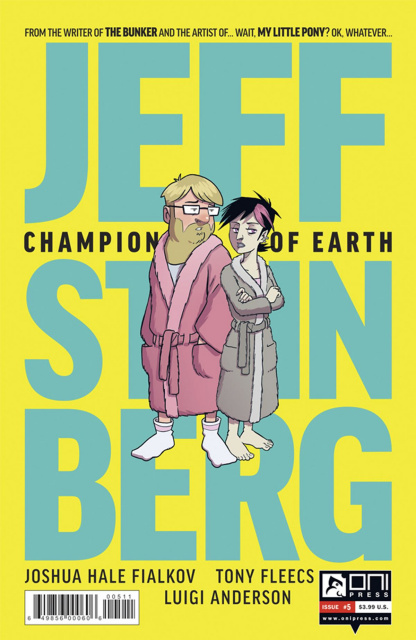 The penultimate issue of Jeff Steinberg's first series! Do you think Jeff even knows what the word "penultimate" means? Yeah, us either. It's the second to last issue of Jeff's first intergalactic adventure and our hero... Wait, "hero"? It's not like he got chosen because he was saving kittens from trees or anything - he was just trying to poop... Anyway, it's almost over! Jeff's survived thus far, maybe he won't actually screw everything up! (unlikely)

"If you're the kind of person who reads your comics while wearing a top hat and monocle, it's possible that some of the humour here could be considered a bit "low brow", but for the rest of us, Jeff Steinberg offers up a hilariously irreverent look at what would happen if that one unremarkable guy you sorta know somehow became planet Earth's only hope to avoid destruction. And I think that's an concept we can all get behind." - Big Comic Page