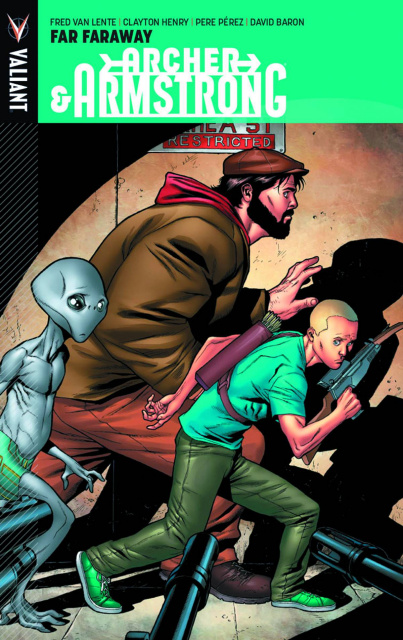 Castaways in the Faraway! Mary-Maria, Archer's arch-nemesis/love interest/adopted sister, is back and dead-set on taking over the Sect by any means necessary. What better way to seize control of the most secret of secret societies than by unlocking their most secretive of secrets inside the secretest place on Earth? Now, as Mary-Maria sneaks her way inside Area 51 to claim a long-hidden prize, Archer & Armstrong are about to discover the forbidden history that binds America's blackest black-ops base to the time-lost lands of the Faraway -wind up fighting their way through each of its tightly guarded mysteries, one punch at a time. Collecting ARCHER & ARMSTRONG #0 and ARCHER & ARMSTRONG #10-13 by New York Times best-selling writer Fred Van Lente (Amazing Spider-Man) and artists Clayton Henry (Incredible Hercules) and Pere Perez (Harbinger Wars), follow Valiant's conspiracy-busting adventurers from the pages of their saga-smashing zero issue and into their most dangerous mission yet, right here in the next epic volume of the series that IGN calls "the most fun you'll have in a 'superhero' comic".