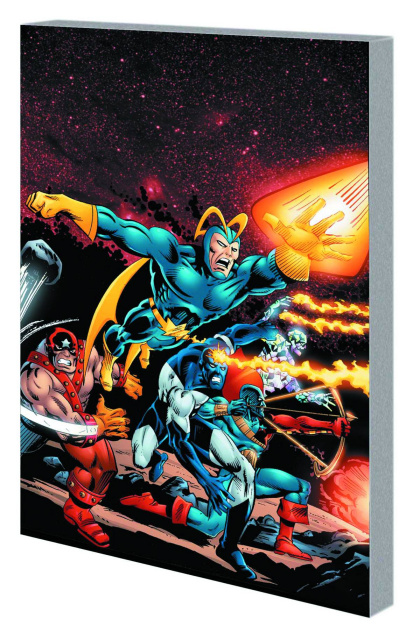 A thousand years from now, Vance Astro, Yondu, Martinex and Charlie-27 - the Guardians of the Galaxy - rise to retake Earth from reptilian raiders! But they're not just building on the heroism of past centuries - they're recruiting from it! Captain America, Dr. Strange, the Thing, the Hulk and more join the star-spanning heroes in the greatest war the future ever saw! Then, as the Guardians help a planet in turmoil rebuild, threats rise from two other worlds: one of them living, the other gone mad! It's cosmic action as you like it, as the Avengers of tomorrow face their baptism of fire! Featuring the introduction of Nikki and the origin of Starhawk! Guest-starring the Silver Surfer! Collecting MARVEL SUPER HEROES (1967) #18, MARVEL TWO-IN-ONE (1974) #4-5, GIANT-SIZE DEFENDERS #5, DEFENDERS (1972) #26-29 and MARVEL PRESENTS #3-12.