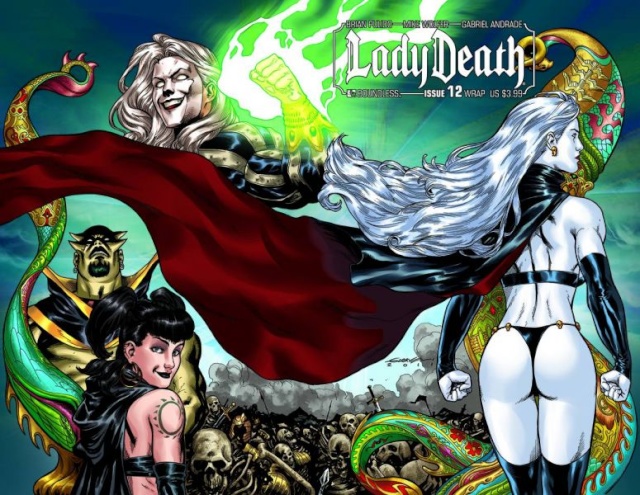 Two life-or-death battles within the ruins of Pallodun will have shockingly different outcomes, and their unexpected conclusions will forever change the fate of the rebellion against the vile Death Queen! Beneath the ground, Lady Death fights for her life against the horror of Stigmata, the villainess composed of sentient, living blood. But how can Lady Death possibly prevail over an untouchable enemy who can infect and possess her victims with but a single drop of her own blood? The mighty Wargoth, meanwhile, faces a decisive battle of his own, as Death Queen's chief assassin Behemoth confronts the rebellion's surrogate leader. This time, however, Behemoth's powers have been boosted by the magical energy of the revenge-seeking Satasha, who was once Wargoth's closest ally. Blood will fly, flesh will fail, and before this night is done, one will die in the most shocking LADY DEATH climax yet! Available with a Regular and Wraparound cover by artist Gabriel Andrade as well as a retailer order incentive Art Deco cover by painter Michael Dipascale!