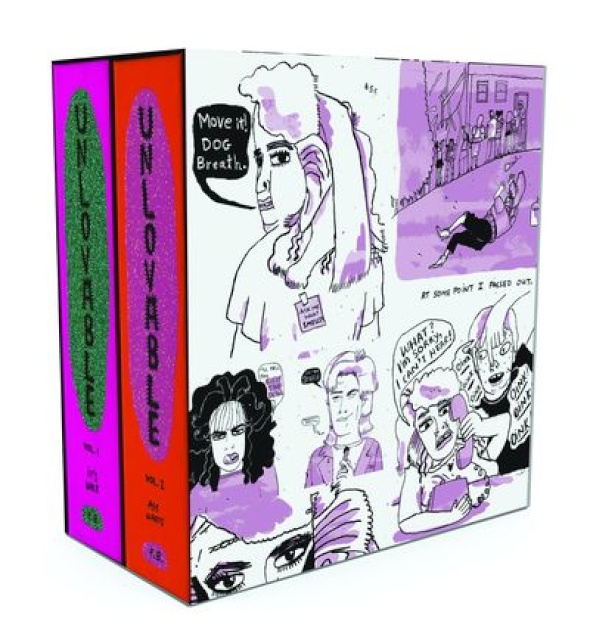 THE COMPLETE COLLECTION OF A MODERN CLASSIC! Loosely based on a teenager's diary from the 1980s found in a gas-station bathroom, Unlovable is the remarkable story of Tammy Pierce, as filtered through the pen of Los Angeles artist Esther Pearl Watson. This boxed set collects the complete, acclaimed two-volume saga of Tammy's sophomore year of high school in 1989.

Tammy has built a devoted following over the last several years in the pages of BUST magazine, where Unlovable continues to be serialized on the magazine's back page, and this beautifully produced, slipcased collection features all 832 pages of her sometimes ordinary, sometimes humiliating, often poignant and always hilarious exploits.

Her hopes, dreams, agonies and defeats are brought to vivid, comedic life by Watson's lovingly grotesque drawings, filled with all the eighties essentials - too much mascara, leg warmers with heels and huge hair, etc. - as well as timeless teen concerns like acne, dandruff, and the opposite sex (or same sex, in some cases). Unlovable addresses the mysteries of adolescence through Tammy's naievete; girls and women in particular will find much that resonates, but men will also relate to Unlovable's universal humor and wide cast of characters. Tammy's life isn't pretty, but it is endlessly charming and hilarious.
This complete edition will be handsomely packaged in an irresistibly sparkly box that would make Tammy proud.