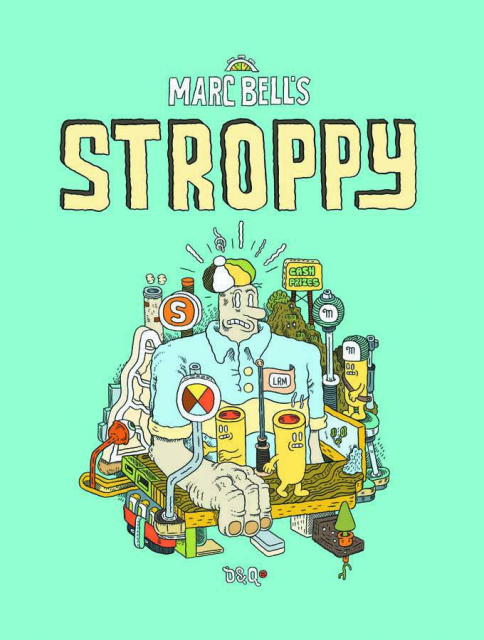 The first full length graphic novel from the author of Shrimpy & Paul. Enter the strange and wordplay-loving world of cartoonist and fine artist Marc Bell, where the All-Star Schnauzer Band runs things and tiny beings hold signs saying "It's under control." Hapless hero Stroppy minds his business, working a menial job in one of Monsieur Moustache's factories, when a muscular fellah named Sean blocks up the assembly line. Sean's there to promote an All-Star Schnauzer Band-organized songwriting contest, which he does enthusiastically, and at the expense of Stroppy's livelihood, home, and face. In hopes for a cash prize, Stroppy submits a work by his friend Clancy The Poet to the contest. Mishaps and hilarity ensue and Stroppy is forced to go deep into the heart of Schnauzer territory to rescue his poet friend. Stroppy is Marc Bell's triumphant return to comics; it's also his first full-length graphic novella, one that thrums with jokes, hashtags, and made-up song lyrics.