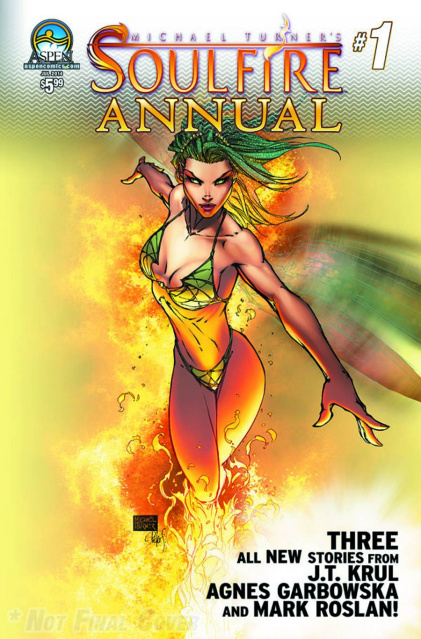 Michael Turner's SOULFIRE returns! Aspen's first ever SOULFIRE ANNUAL arrives, jam-packed with three all new stories featuring some of the most popular characters in the SOULFIRE universe-and more! Join veteran SOULFIRE writer JT Krul as he presents a young Grace in a world long forgotten, full or dragons and danger! Fan favorite illustrator Agnes Garbowska debuts a new SOULFIRE story all her own, as she handles the writing and art duties in a special tale featuring Grace and several other SOULFIRE favorites! And BubbleGun creator Mark Roslan explodes onto the scene with a futuristic bank robbery that even the magic of Malakai may not be able to stop! Don't miss out on the debut of the first ever SOULFIRE ANNUAL #1 in this thrilling oversized issue featuring a re-mastered SOULFIRE cover by series creator Michael Turner and Peter Steigerwald!