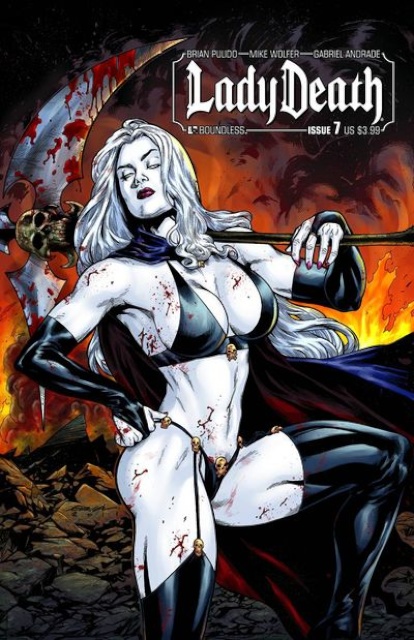 After last issue's mind-blowing revelation of the true identity of Death Queen, the next chapter of LADY DEATH begins! Drawn back to the Under Realm after her banishment to Earth, Lady Death has returned, but she is a shadow of her former self and still not in possession of her full power. That power lies in the hands of Death Queen, who has ripped her greatest nemesis through the dimension-spanning breach for one very specific purpose: To fuel the enormous Infernal Engine will could wipe out all life in the entire Under Realm! It's the battle you've been waiting for, as Wargoth takes on the monstrous Behemoth, the Demon-led rebellion launches an attack against the zombie hordes guarding the Infernal Engine and Lady Death goes head-to-head with Death Queen in the most emotional and vicious battle of her life! Co-written by Mike (Gravel, Wolfskin) Wolfer and original creator Brian Pulido, this series promises to be the most powerful Lady Death tale ever! This arc features the art of amazing new talent Gabriel Andrade who also provides the Regular and Wraparound covers for this issue! Also available with a special Art Deco Retailer Order Incentive by painter Michael Dipascale!