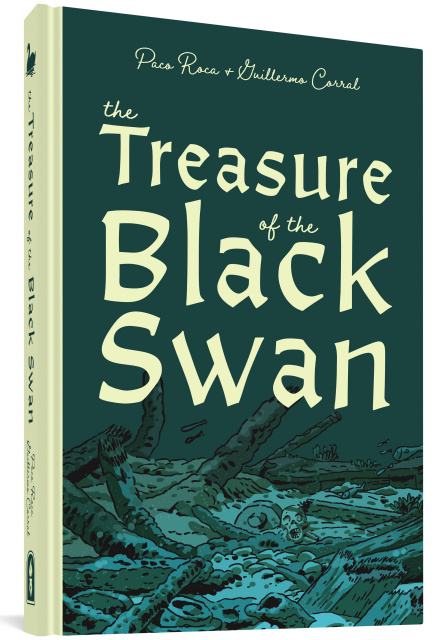 The Treasure of the Black Swan

Based on real events, this thrilling graphic novel chronicles the intense legal and political battles sparked by the discovery of a priceless shipwreck.

May 2007. When an American treasure-hunting company uncovers a shipwreck containing the greatest underwater trove ever found, the world is captivated by their discovery. But over in Spain, a group of lowlevel government officials surmises that the sunken ship is in fact an ancient Spanish vessel. Thus begins a legal and political thriller, pitting a group of idealistic diplomats against a rich and powerfully connected treasure hunter, in which vital cultural artifacts and hundreds of millions of dollars hang in the balance.

Cartoonist Paco Roca and writer Guillermo Corral bring a cinematic flair to this graphic novel, combining threads of Tintin-inspired seafaring adventure, political intrigue, tense courtroom drama, and, in the midst of it all, a budding romance. A gripping dramatization of a ittle-known, unbelievable true story of money, political power, and cultural heritage.

Paco Roca (Valencia, 1969) is a cartoonist and illustrator whose works have won a variety of awards, including Spain's National Comics Prize in 2008 and the prizes for best script and best work at the Barcelona International Comic Fair in 2008 and 2011. guillermo corral has worked as a career diplomat since 1997. The Treasure of the Black Swan, a work of fiction based on real events that he witnessed firsthand, marks his debut as a comic book writer.