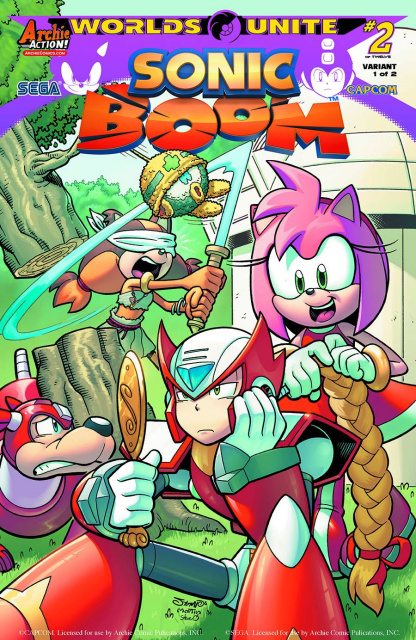 It slices! It dices! It joins line-wide crossover events: it's SONIC BOOM! "Sonic/Mega Man: Worlds Unite" Part Two: It was just another day at the races-y'know, the ones with the giant spider-mechs?

Things start to get weird, even for the lovable, paranoid Sticks, when X and the Maverick Hunters arrived!

Meanwhile, the epic bromance of the century is rekindled as the captured Drs. Eggman and Wily are forced to turn their life-long nemeses-Sonic and Mega Man-into minions for the terrifying Sigma! After the history-making "WORLDS COLLIDE" crossover event, Sonic the Hedgehog and Mega Man unite once more-and this time Sonic Boom and Mega Man X are joining the fray! Featuring cover art from the legendary Patrick "SPAZ" Spaziante, a special "happy fun time crossover" variant by Ryan Jampole and part 2 of the epic 12-part connecting variant cover series by artist Ben Bates!