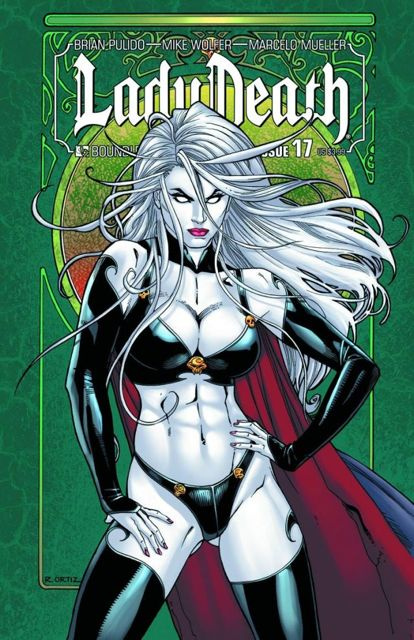 It's the last stand for Lady Death and her allies, as a legion of demonic warriors and undead, flesh-eating soldiers presses ever forward, threatening to extinguish the rebellion against Death Queen in one blood-drenched massacre! Hopelessly outnumbered and facing certain, gut-ripping death, Lady Death is presented with a potentially deadly key to victory from a most unexpected source. But can she trust the desperate plan of Stigmata, her most hated enemy, or is it merely a carefully calculated plan of the villainess to infect Lady Death, body and soul, and achieve her ultimate conquest? Death Queen must be stopped before the entire Under Realm is destroyed by her ultimate weapon, but while Lady Death fights on one front, Death Queen's descent into madness continues as her own daughter Tormina must decide between dying as a result of Death Queen's agenda of extinction, or being murdered by her own mother for the ultimate betrayal! Available with a Regular cover by Rafael Ortiz, Sultry Cover by Juan Jose Ryp, Wraparound by Michael Dipascale, and a retailer order incentive Art Deco coversby painter Michael Dipascale!