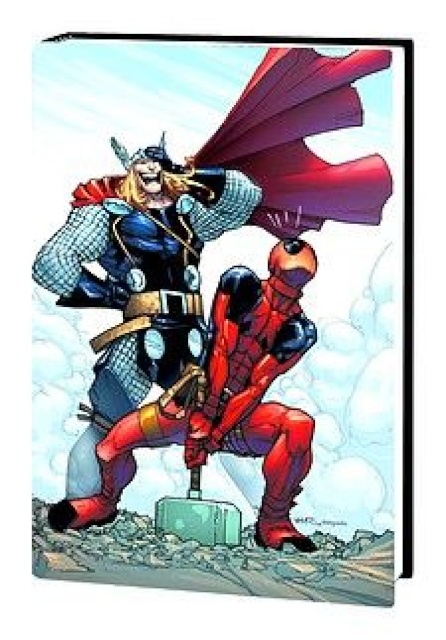 Everyone's favorite Merc with a Mouth continues hacking and wisecracking his way across the Marvel Universe in this latest volume of riotous, ridiculous and outright reprehensible team-ups! In Round 1, it's clobberin' time as Deapoolmania runs wild on the Thing! In Round 2, Indiana Deadpool runs afoul of Thor amid Asgard's ruins and learns some treasures are best left undisturbed - particularly the ones containing evil, enormously powerful spirits imprisoned by Odin thousands of years hence. In Round 3, Deadpool and Iron Fist grudgingly team up to stop an ancient and villainous warlord - but Deadpool have to take down Iron Fist, as well, to secure his payday? In Round 4, gaze in horror upon the fiendish experiments inflicted upon Deadpool and Bessie the Vampire Cow by the malevolent Dr. Kilgore in the name of mad science, and bear witness to their terrible revenge! In Round 5, the voices in Deadpool's head hire him to do the dirtiest job of his career, but the mission is endangered when he's trapped in an elevator with the Watcher! In Round 6, Deadpool realizes there's no government bailout for super-powered mercenaries and is forced to do the unthinkable: look for a job! Luckily, Galactus has a position open in the Herald department. And for the knockout punch: Wolverine, Deadpool and a giant robot! Collecting DEADPOOL TEAM-UP #888-883 and WOLVERINE/DEADPOOL: THE DECOY (MDCU).