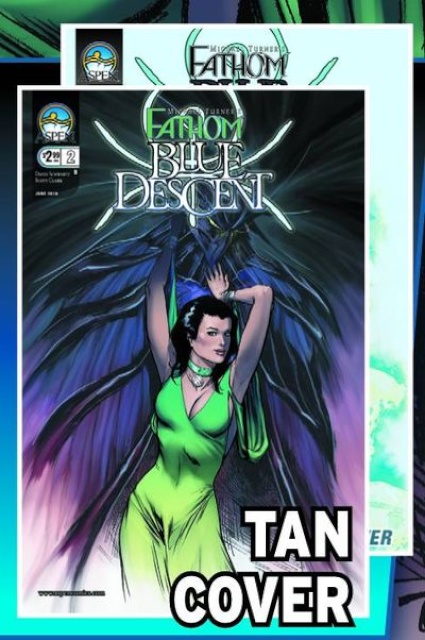 The past comes crashing into the present in this exciting all-new Aspen mini-series, FATHOM: BLUE DESCENT! Dissension takes center stage in this pulse-pounding second issue of Aspen's all new FATHOM mini-series. Absaloma is a member of the Blue, searching for answers to his own purpose within the ever-changing landscape under the surface. However, his self-exploration takes a back seat for a search far more important to his livelihood - the search for his captive wife (and Aspen's mom!), Eilah! Kidnapped by the race known as the Black, Eilah's lurid nightmares of this mythical species came to horrifying life when their arrival indeed turned into a reality. Now, with a new focused determination and motivation, it is up to Abseloma and his trusted childhood friend Zo to rescue his wife from the ominous race of the Black! With FATHOM's return at hand, some new creators and several familiar names are coming along for the ride! Taking charge of the writing chores is David Schwartz, known for his critically acclaimed Image Comics title Meltdown. Art duties for all of Aspen's curvaceous lines and intricate environments will be handled by Scott Clark of Stormwatch, Alpha Flight and X-Men fame. Together, this dynamic duo is looking forward to putting their stamp on FATHOM: BLUE DESCENT as never before! Over a decade's worth of answers spill out onto the pages of this exciting, all new FATHOM: BLUE DESCENT mini-series!