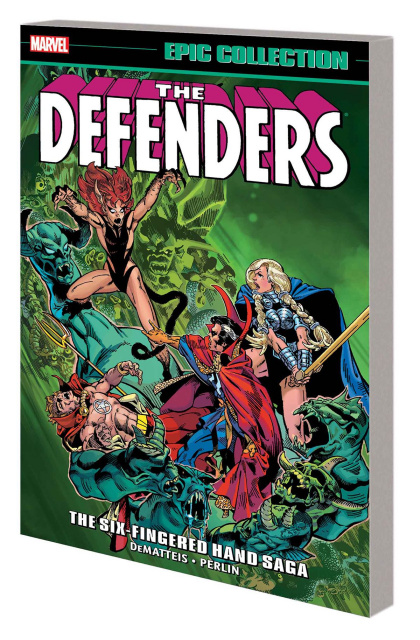 The Defenders: The Six-Fingered Hand Saga

The greatest non-team in comics gets the Epic treatment! J.M. DeMatteis and Don Perlin take Doctor Strange, the Hulk, Nighthawk, Hellcat and the Son of Satan on wild adventures into the occult - and against each other! These weird tales begin with a broken Eternity; evolve to include demons, Dracula and the Devil-Slayer; and culminate in a double-sized issue #100 extravaganza! If the Defenders can't prevail, it'll be hell on Earth - literally! Known as "The Six-Fingered Hand Saga," this is one of the most compelling Defenders adventures of all time. Plus: Captain America teams up with the non-team in hopes of staving off the beginning of World War III. And witness the shocking death of a Defender! Collecting DEFENDERS (1972) #92-109, MARVEL TEAM-UP (1972) #101 and CAPTAIN AMERICA (1968) #268.