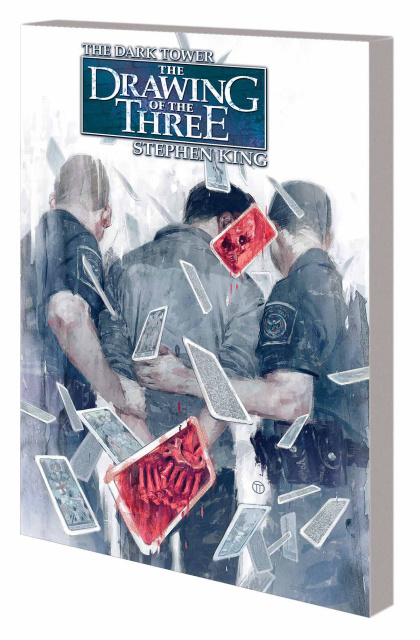 The Dark Tower: The Drawing of the Three - House of Cards

Stephen King's dark fantasy epic returns as Eddie Dean comes face-to-face with the Gunslinger! Eddie, the troubled young man with the ability to open doors to other worlds, smuggles narcotics for dangerous mobster Balazar. But now he must escape a packed airplane guarded by armed customs agents! How will Eddie avoid prison - and fulfill the contract that will clear his brother Henry's debt? The answer lies in Mid-World, with a dying gunslinger named Roland, and his quest to save the Dark Tower! With Henry in Balazar's clutches, Eddie must face down the mobster - but how, without revealing his secret? As gangland war breaks out, it's Eddie and Roland versus the world! What doors will be opened when there's nothing left to lose? Collecting DARK TOWER: THE DRAWING OF THE THREE - HOUSE OF CARDS #1-5.