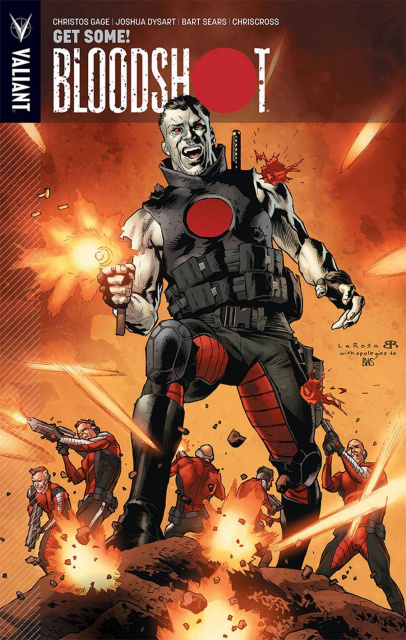 Bloodshot Vol. 5: Get Some!

'90s tech. Bad attitudes. No wifi. It's Valiant's 21st-century shock troops - head-to-head against Project Rising Spirit's first wave of superhuman specialists! With a valuable oil pipeline in dire peril, Bloodshot and the expendable commandos of H.A.R.D. Corps are headed to Africa to bring down a network of terrorist saboteurs. But as Bloodshot digs into the multinational oil conglomerate he's been brought in to protect, he'll soon find himself confronted by the complex truth behind the terror - and up close and personal with an older, scrappier, more grizzled generation of wet-wired soldier from the glory days of proxy wars and state-sponsored assassination. Collecting BLOODSHOT AND H.A.R.D. CORPS #18-19, BLOODSHOT AND H.A.R.D. CORPS: H.A.R.D. CORPS #0, and BLOODSHOT AND H.A.R.D. CORPS #22-23, don't miss a single shot fired as acclaimed creators Christos Gage (Superior Spider-Man), Joshua Dysart (Harbinger Wars) and Duffy Boudreau (BlackAcre) partner with an all-star cast of top talents - including Bart Sears (X-O Manowar), ChrisCross (Superman/Batman) and Al Barrionuevo (The Authority) - for a brutal, globe-spanning cavalcade of missions from the classified archives of Project Rising Spirit and beyond.