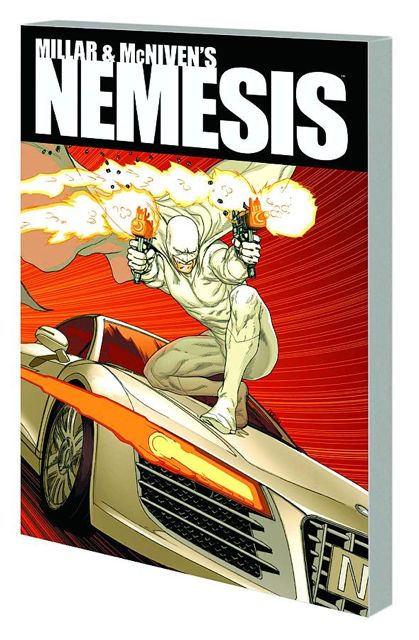 The writer and artist behind CIVIL WAR and OLD MAN LOGAN return with a tale of one man with a plan for vengeance! Who is Nemesis? He is a son of privilege, an inheritor of billions from his deceased parents. He owns a fleet of the finest cars and a hangar full of planes, and has countless technological gadgets at his command. Donning a mask and long flowing cape, he's a man in white fighting relentlessly for a cause in which he believes. But if you're thinking Mark Millar (KICK-ASS, Wanted) and Steve McNiven (CIVIL WAR) are telling a story you've already heard before, think again: You'll know you've got something completely different by the turn of the first page. Nemesis tracks the violent fantasies come to life of the villain to top all villains in an in-your-face, unapologetic tour-de-force of action, ultraviolence and over-the-top humor! Collecting NEMESIS #1-4. 112 PGS.