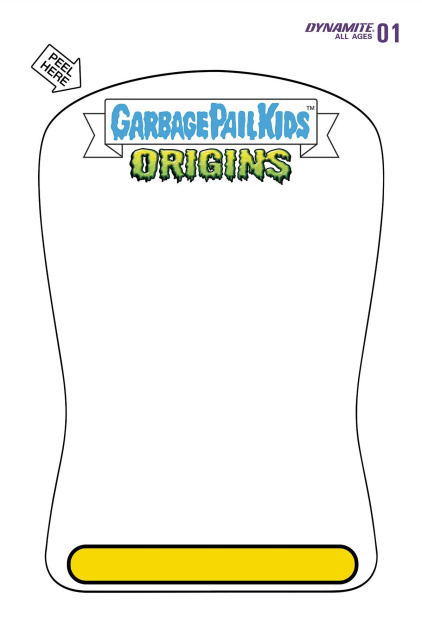 The insane minds of Adam F. Goldberg, Hans Rodionoff and Jeff Zapata have joined forces to bring you the Garbage Pail Kids as you've never seen them before. Dynamite Entertainment and this incredible trio of creators proudly presents give you... Garbage Pail Kids: Origins!

This all-new GPK comic book event is a bad-ass, sprawling, superhero epic; we not only learn how our GPK heroes came to be... but we also reveal to the world that Adam Bomb and his gang of good guys were instrumental in the outcome of World War II and the fate of humanity!

Issue #1 starts with Adam Bomb's origin and how he begins as an unassuming, flat-footed soda jerk named Adam Baum... ultimately transforming into an All-American superhero named Adam Bomb. Thanks to an unfortunate radiation leak, Adam leads a team of other enhanced super-charged garbage humans to take down the axis of evil... led by Nasty Nick.

Adam F. Goldberg is a producer and writer, well-known for The Goldbergs, How to Train Your Dragon, The Muppets: Mayhem, and Garbage Pail Kids: Fury Load. He's currently writing a new "Damage Control" series for Marvel Comic (with Hans Rodionoff) and created the all-new Muppets series for Disney in addition to his work on "Garbage Pail Kids: Origins"!

Hans Rodionoff is a writer and producer, known for Mnemovore, Lost Boys: The Thirst (2010) and Man-Thing (2005). He's currently writing a new "Damage Control" series for Marvel Comic (With Adam F. Goldberg), writing on the all-new Muppets series for Disney in addition to his work on "Garbage Pail Kids: Origins"!

Jeff Zapata has worked in the comic book and trading card biz for over twenty-five years, including thirteen gross, memorable ones as an editor, art director on Garbage Pail Kids Co Trading cards and other major brands at the Topps Company. Zapata Co-directed Thirty Years of Garbage: The Garbage Paul Kids Documentary. Zapata also recently illustrated