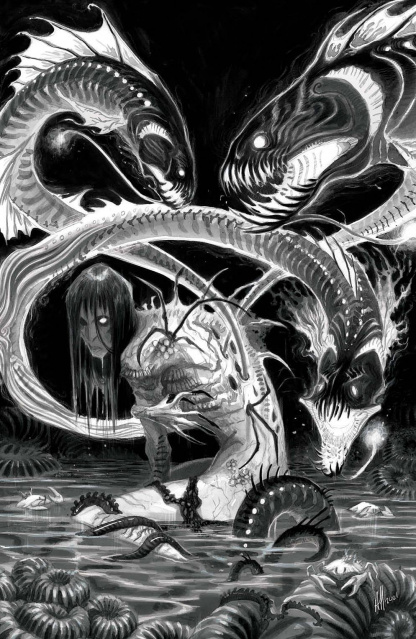 What happens when one woman becomes the real monster society has always made her out to be?

Dragged by her sister Wendy to a feminist retreat on the remote island of Angitia, Marion Angela Weber hopes to gain some perspective and empowerment... that isn't at the bottom of a bottle. But everything is horribly derailed after an assault on their first night there. The violent encounter awakens something in Marion she never imagined, triggering warped mutations in her body, and awakening a hunger she can't bring herself to name. When the townsfolk react with suspicion and violence, what unforgivable act will transform Marion into the very monster they've made her out to be?

A provocative five-issue horror series by award-winning journalist and opinion writer Jude Ellison S. Doyle (Dead Blondes and Bad Mothers: Monstrosity, Patriarchy, and the Fear of Female Power) and artist A.L. Kaplan (Full Spectrum Therapy) that explores the anger of women trapped by society's expectations and the reclamation of power through collective rage, perfect for readers of Redlands and Something is Killing the Children.