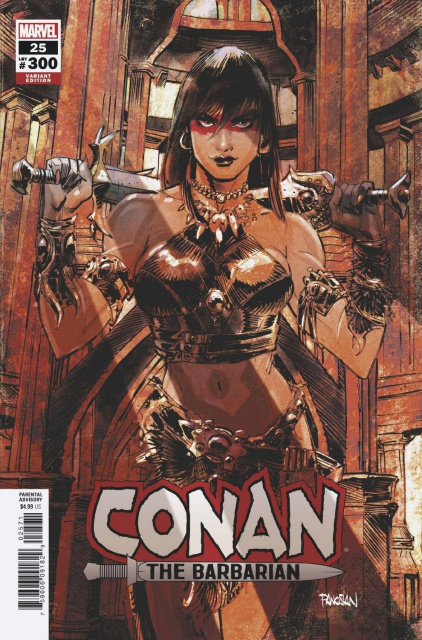 CELEBRATING 300 ISSUES OF CONAN THE BARBARIAN... AND THE RETURN OF BÊLIT!

By Crom and Mitra, it's been 300 issues since Roy Thomas and Barry Windsor-Smith first brought the Barbarian to comics in 1970's CONAN THE BARBARIAN #1! CONAN's oversized 300th-issue spectacular kicks off with Jim Zub and Cory Smith's ongoing saga, as we return to Conan's much-lauded days sailing with the queen of the seas herself, BÊLIT!

But - past, present and future will collide in ways unexpected and strange! Sharpen your blade for three additional, all-new tales from across Conan history! Dan Slott enters the Hyborian Age with Marcos Mart n, for an untold NIGHT OF OBLIVION from Conan's thieving days. Larry Hama and Christopher Priest at last return to the saga with their own new stories - from a hotheaded young barbarian in battle to an aged KING CONAN, who must defend his kingdom from the re-emergence of WRAARL, the DEVOURER OF SOULS!