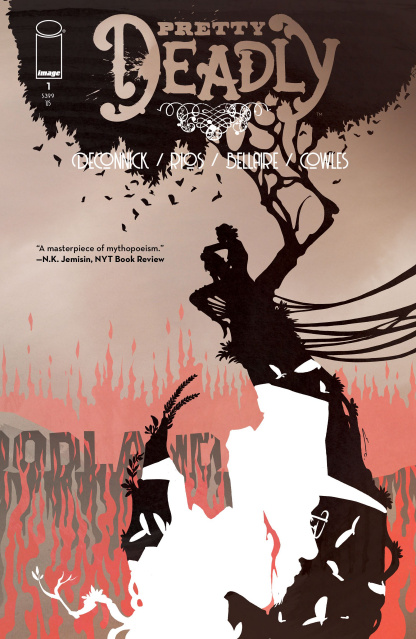 "Pretty Deadly going to old Hollywood is the best turn this dark fable has taken yet. One of my favorite comics, aiming right at my jugular. I can't wait for more." -Ed Brubaker

"With its poetry and violence, there's nothing like this. Cherish it." -Kieron Gillen

"This weird western saga gleefully, dreamily fuses a Greek chorus, spaghetti westerns, American trickster tales and creepy Japanese shoujo (girls') manga. At the core of it, however, is a masterpiece of mythopoeism that many literary fantasists struggle to emulate." -N.K. Jemisin, NYT Book Review

"A ferocious series of powerful characters born of gorgeous art. It is Sergio Leone crossed with Neil Gaiman's American Gods, a hellish yet alluring mix of epic mythology from the ancient poets, the relentlessly unforgiving fairy tales of the Old World, and the blood-soaked folklore of the Old West." -Tor.com

"From the moment you crack open its pages, you're transported into a world as fantastical as any fairy tale and as haunting as any ghost story. Pretty Deadly represents genre-bending to the point of breakage in the best possible way." -IGN

"It's ambitious and challenging...under a facade of violence and sacrifice. Rios's art is lush and detailed, and is more than capable of keeping up with the far-reaching story." -Publishers Weekly

"Pretty Deadly, one of the most fascinating comics published today, is a magical realist genre-bender that began as a Sergio Leone-style Western, but has transformed into a grisly World War I story with its second arc." -The Onion's AV Club