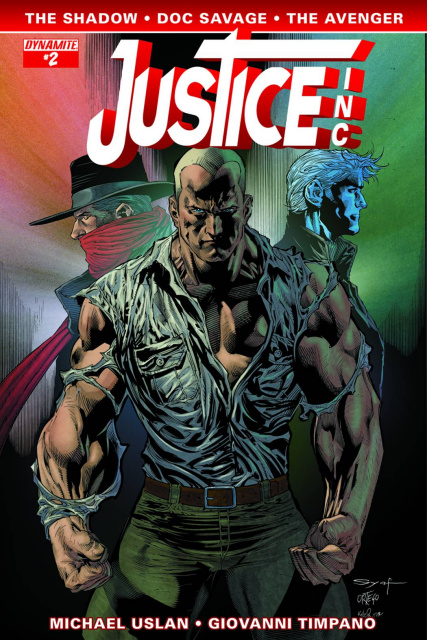 A rift in Time brings the Doc Savage of today face-to-face with the Doc Savage of 1939! Even Einstein is not certain of the consequences! Just then, The Voodoo Master strikes, laying a death-trap for his nemesis, The Shadow, while another powerful evil force lurks in the darkness and poised to strike next. Meanwhile, wealthy industrialist Richard Henry Benson and his family are aboard a plane headed for Nepal to witness Doc Savage's latest scientific breakthrough, co-funded by Benson. But the airliner is instead destined for the very heart of tragedy. What are the secrets linking The Shadow and Doc Savage to the birth of The Avenger? What allows three men of mystery and power to shed their very different ideological shells and deal with each other on a deeper human level? In this tale, a shaky bond is forged among not just Doc Savage, The Shadow and The Avenger, but among "Clark, Kent and Richard." It's the revealing Chapter Two of six in the saga of "JUSTICE, INC."