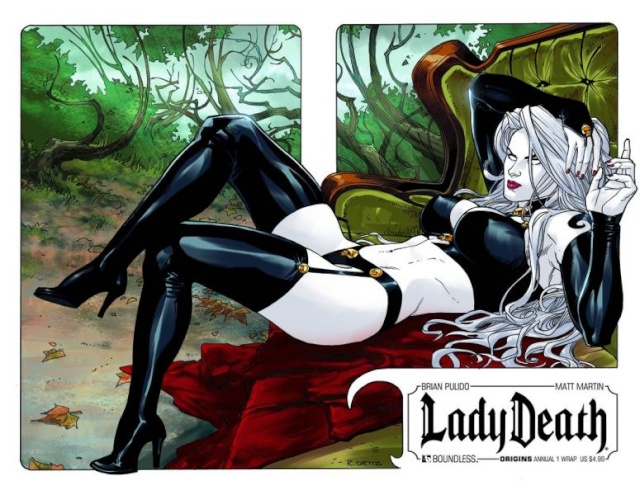 Several years in the making, cover artist Matt Martin has drawn this entire super-size Annual featuring a manic tale of Lady Death's past! As part of the Lady Death Origins series, this story is set before the current on-going monthly and is written by original creator Brian Pulido! An ungodly, nightmare villainess known as Leviatha sets her sights upon Lady Death, Satasha and Wargoth. Years before the specter of Death Queen cast its shadow across the Under Realm, the three warriors fought a much different battle for survival, but nothing they have ever faced could prepare them for the soul-crushing agony and morality-testing horrors they must endure to survive in the surrealistic realm within which they have become prisoners. But Leviatha has her own secrets, and Lady Death's only hope is to unlock the truth of the torturous sorceress' torment before Death claims them all! Available with a sexy Regular cover by Matt Martin or a Wraparound cover by Richard Ortiz. Also available with a special Art Deco Retailer Order Incentive by painter Michael Dipascale!