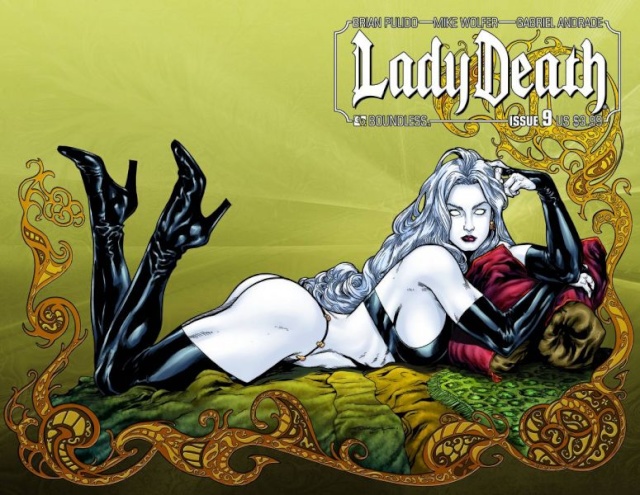 Lady Death's war against the mischievous Death Queen continues! After learning that the kingdom ruled by Satasha had entered into a secret alliance with Death Queen, Lady Death was determined to burn New Aberffraw to the ground. But the unbridled wrath of the albino goddess has been momentarily redirected, as Death Queen's unstoppable enforcer, Behemoth, his legion of undead warriors and giant, lava-spewing spiders launches a terrifying offensive upon the city in a search for Lady Death and the rebel leader, Wargoth. As the earth-shaking battle commences, secrets will be revealed, lovers will die and double-crosses will be exposed, but will there be anything left of the besieged kingdom for the blood-splattered victors to rule? Co-written by Mike (Gravel, Wolfskin) Wolfer and original creator Brian Pulido, this arc features the art of amazing new talent Gabriel Andrade who also provides the Regular and Wraparound covers for this issue! Also available with a special Art Deco Retailer Order Incentive by painter Michael Dipascale!