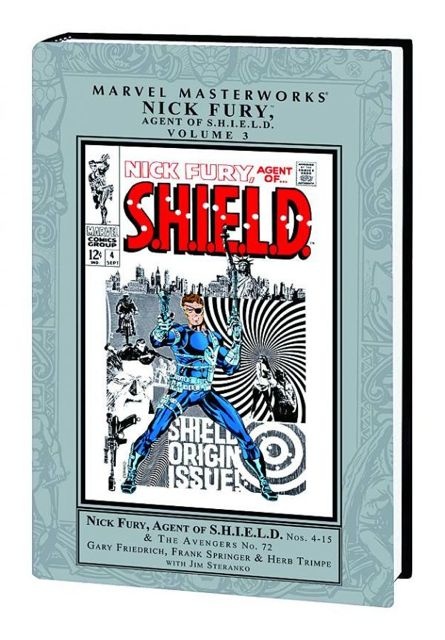 The MARVEL MASTERWORKS are proud to present the continuing adventures of Col. Nick Fury in the Swinging Sixties! The irascible Agent of S.H.I.E.L.D.'s series was a truly innovative lightning-in-a-bottle merger of comics and the spy craze of the day, and where better to start our collection than with a Nick Fury origin issue housed inside an iconic Jim Steranko cover? Next up: Steranko's last S.H.I.E.L.D. epic, 'Whatever Happened to Scorpio?,' will dazzle you before we launch into a new era of adventures including a moon-busting space mission, a mind-bending trip Fury may never come back from and a sub-earth battle with Supremus! Then, Nick Fury faces one of his oldest enemies in the Hate-Monger (a.k.a. Adolf Hitler); the British invade as Steve Parkhouse and Barry Windsor-Smith offer the one-shot 'Hell Hath No Fury;' and Hydra returns with its sights set on assassinating the S.H.I.E.L.D. director. It's a cliffhanger that will shock and surprise you! Also packed with cool covers from the Colonel's many S.H.I.E.L.D. reprint comics, and his appearance from MARVEL SPOTLIGHT #31, this Masterworks completes every fan's classic Nick Fury library! Collecting NICK FURY, AGENT OF S.H.I.E.L.D. #4-15, AVENGERS #72 and MARVEL SPOTLIGHT #31.