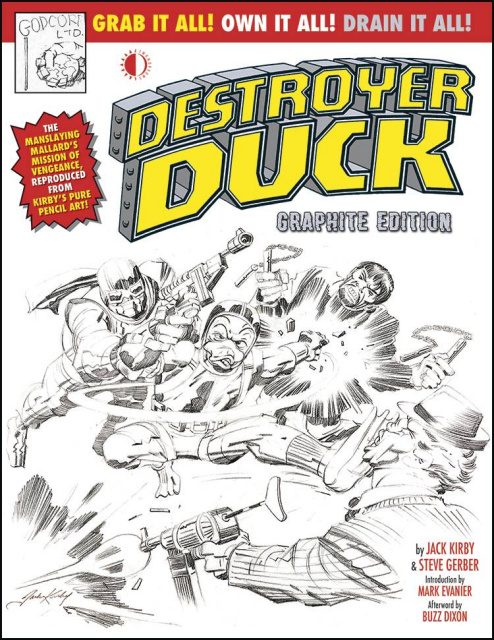 In the 1980s, writer Steve Gerber was embroiled in a lawsuit against Marvel Comics over ownership of his creation Howard The Duck. To raise funds for legal fees, Gerber asked Jack Kirby to contribute to a benefit comic titled Destroyer Duck. Without hesitation, Kirby, in his own dispute with Marvel at the time, donated his services for the first issue, and the duo took aim at their former employer in an outrageous five-issue run. With biting satire and guns blazing, Duke "Destroyer" Duck battled the thinly veiled Godcorp (whose infamous credo was "Grab it all! Own it all! Drain it all!"), its evil leader Ned Packer and the (literally) spineless Booster Cogburn, Medea (a parody of Daredevil's Elektra), and more! Now, all five Gerber/Kirby issues are collected. relettered and reproduced from Jack's unbridled, uninked pencil art! Also included are select examples of Alfredo Alcala's unique inking style over Kirby on the original issues, Gerber's script pages, an historical Introduction by Mark Evanier, and an Afterword by Buzz Dixon.