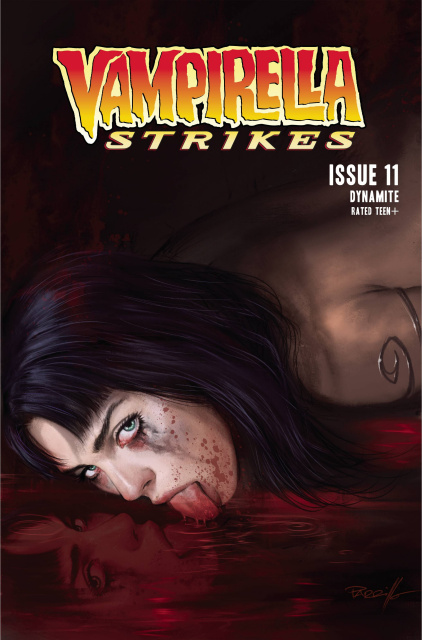 Having fulfilled her role of in Vengeance, Vampirella is now posed to Strike in an all-new series arising from the post-apocalyptic ashes of Dynamite's Vengeance of Vampirella series! It has been fifteen years since the death of Mistress Nyx and the world in slowly recovering, but this isn't a world that we've ever seen before.

This is a world where the natural, and the supernatural have merged to create a dangerous new place-A world very much in need of Vampirella. Something inhuman stalks the streets of Sepulcher City, hungry for the lives of the innocent.

But the murderer has made a very bad mistake when killing someone close to Vampirella. The Danse Macabre's finest agent is out for revenge, hunting in the most monstrous part of the city called the Menagerie in search of a mysterious monster before it kills again. Enter the world of Vampirella Strikes under a series of amazing artist by returning superstars Lucio Parrillo, Stephen Segovia, Jonathan Lau, Junggeun Yoon, and another stunning cosplay cover - featuring Dizzymslizzyy as Vampirella!