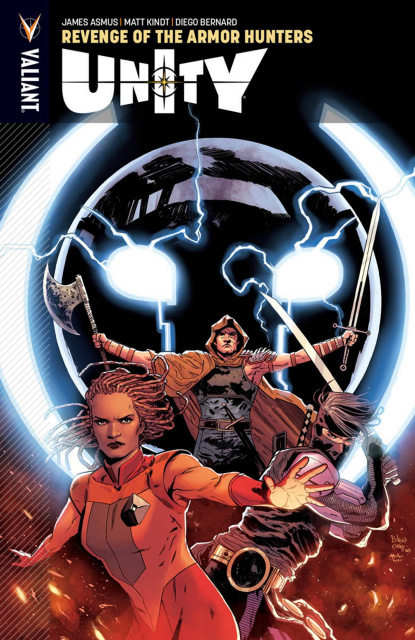 The Armor Hunters never leave a man behind! GIN-GR, the reformed killer robot who destroyed Mexico City and rampaged through downtown Los Angeles during the Armor Hunters' attack, has turned on her Unity teammates! As she perpetrates the world's most unstoppable jailbreak - a head-first, guns-blazing, kamikaze flight straight into the military base that holds her one-time squad - can X-O Manowar, Livewire, Ninjak, and the Eternal Warrior stop the giant engine of destruction... while trapped inside it? Multiple Harvey Award nominee James Asmus (QUANTUM AND WOODY) and rising star Diego Bernard (X-O MANOWAR) rocket UNITY into their most action-packed battle yet! Then: Matt Kindt presents the grand finale to his acclaimed two-year run on Valiant's premier superteam...but not before James Asmus (QUANTUM AND WOODY), Elliott Kalan (The Daily Show), Tim Siedell (The Nightly Show), Michael Kupperman (Tales Designed to Thrizzle), Ty Templeton (Batman Adventures), and more put Unity through the wringer! Collecting UNITY #23-25.