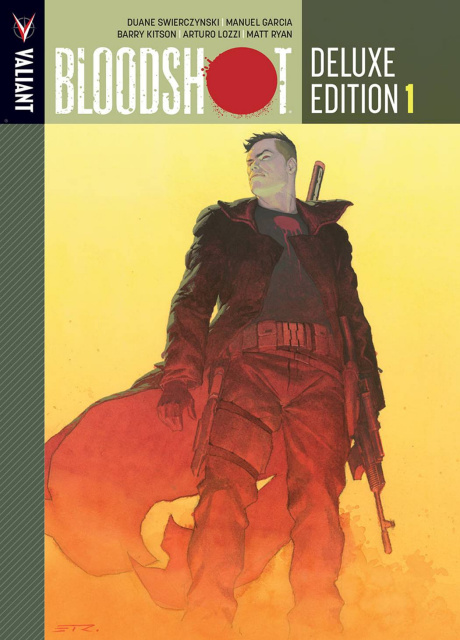 An oversized, deluxe hardcover collecting Bloodshot's brutal first year in the Valiant Universe! From his first no-holds-barred suicide run to the heated firefights of the Harbinger Wars, Valiant's indestructible, nanite-enhanced commando begins the quest for the long-lost answers behind his origin in this prestige-sized collection by acclaimed writer Duane Swierczynski (Birds of Prey) and all-star artists Manuel Garcia (Black Widow), Barry Kitson (Amazing Spider-Man) and Arturo Lozzi (Immortal Weapons). Your name is Angelo Mortalli. Your brother is trapped behind enemy lines and on the verge of - no. That's not right. Your name is Raymond Garrison. You've retired from the dangers of the field, but a desperate plea from your oldest friend plunges you into a vicious firefight that - no. That's not right, either. You are Bloodshot. You are the shade of gray that freedom requires. The perfect confluence of military necessity and cutting-edge technology. A walking WikiLeaks. A reservoir of dirty secrets that could set the world on fire. And you've just been captured. Collecting BLOODSHOT #1-13 (2012), the Bloodshot Deluxe Edition Book One hardcover also comes jam-packed with more than 20 pages of never-before-seen art and extras, direct from the Valiant vaults.