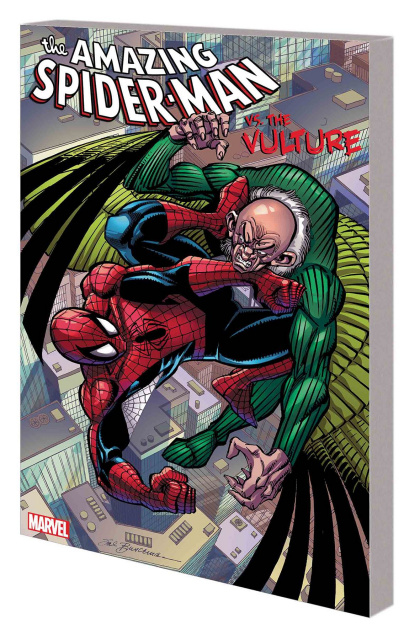 Spider-Man vs. The Vulture

Spider-Man's greatest battles with his avian arch-adversary: the Vulture! Adrian Toomes has long been one of Spidey's most fearsome foes, and their early encounters are all-time classics! But when Toomes' ex-cellmate Blackie Drago takes to the skies, the elder statesman must prove that he is the one, true Vulture! Toomes gets a new lease on life and soars once more - but what started him on his airborne life of crime? Discover the secrets of the Vulture's origin! He'll take on more pretenders, the Vulturions - and seek forgiveness from a surprising victim when faced with his own mortality. But when the Vulture is hired to kill Spidey, will Peter Parker clip his wings for good? Collecting AMAZING SPIDER-MAN (1963) #2 (A STORY), #7, #63-64, #224 and #240-241; WEB OF SPIDER-MAN (1985) #3; SPECTACULAR SPIDER-MAN (1976) #186-188; and FRIENDLY NEIGHBORHOOD SPIDER-MAN #14-16.