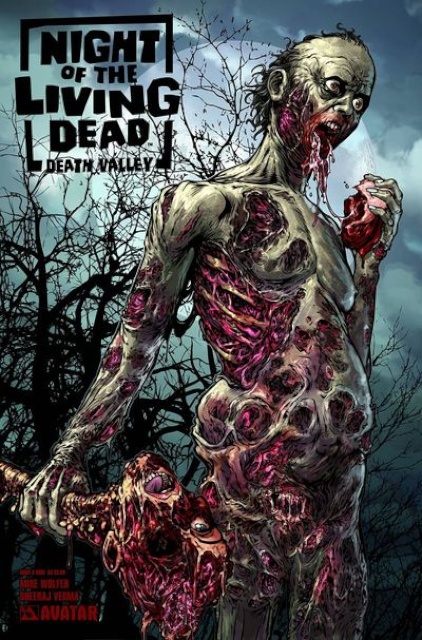 A weekend in the middle of nowhere sounded like a good idea, but who could have possibly imagined that the terror that crippled the nation one year earlier would make a resurgence in the heart of Death Valley? Miles from the nearest town, a group of Californians out for a good time are having just that, but a ghost from her past has come back to haunt Christine, who's famed television reporter father died at the hands of the living dead during the first night of horror the previous Spring. As the group wrestle with their own personal affairs amidst the valley's white dunes, a bizarre cult secreted in the rocky hills is preparing for their own night that will live in infamy. This is socially-turbulent 1969, and the cult plans to launch a symbolic and horrific strike against every form of establishment within reach of the claws of the flesh-hungry zombies they are stockpiling! Written by Mike Wolfer this blood-drenched five-issue series features the return of Dheeraj (Escape of the Living Dead) Verma. Don't miss all the terrifying covers, Michael Dipascale paints the Regular edition, Mike (Gravel) Wolfer horrifies with the Wraparound cover, and twisted Matt Martin splatters the Gore covers all over the page. Also, retailers can get a ultra-rare Classic B&W cover as an order incentive.