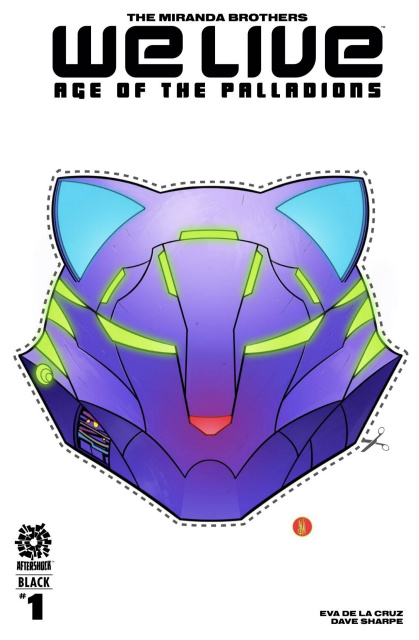 We Live: Age of the Palladions #1: Black (Mask Cover)

We are back into the hopeful, apocalyptic world of Tala and Hototo. Year 2090. Six years have passed since Salvation Day, when Palladions, with their majestic powers, emerged as the protectors of humanity, saving the five remaining Megalopolis and securing the future of the human species.

But nothing stays and the horizon always brings a new storm. These are dark times. Death, famine and desperation lurk around the streets of Megalopolis 9. The shield has lost thirty percent of its reach. The New Nature has learnt to create cuts in the energy channels that power the Beacon and the Palladions. A neverending horde of beasts siege the remains of the city, increasing the desperation among the population.

The responsibility of keeping the city afloat lies on the shoulders of Generals Nesbo and Terrassa, who have to resort to risky survival measures. Journeying outside of the city in search of food is the only thing that is keeping the population alive, but nothing seems enough.

Fear opens its way through Megalopolis 9 like a great crack of faith that separate more and more the population from the Palladions. Snow covers the city with a heavy white mantle, invoking oblivion and nothingness.