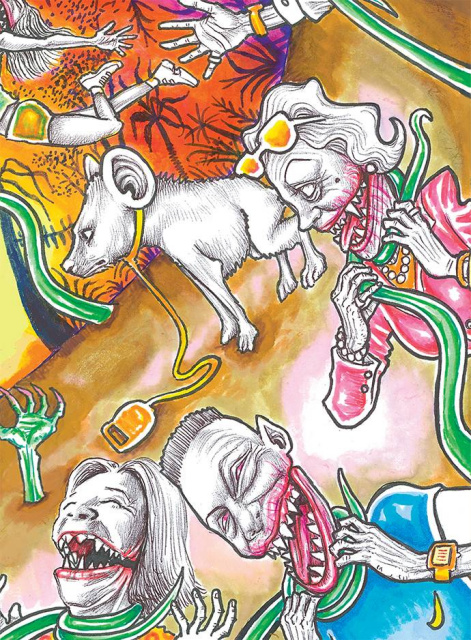 When one man, too terrified to leave his ratty apartment during the pandemic, turns exclusively to social media for human contact, his quarantine routine disintegrates into madness. Thus kicks off a hilariously withering social critique of an entire planet filled with masses of humanity suffering from a dearth of compassion, decency, and empathy. Nothing escapes Dola's manic, trenchant stare as he takes on a vast array of contemporary social deformities - anti-vaxxers, conspiracy theorists, xenophobes, the alt right, the woke left, evangelical fanatics, corporate power mongers, racists, fascists, neo-Nazis, gerontophobes, nihilistic revelers, Boris Johnson, and the death of the social contract. And yet there are still those rare moments of human idealism and striving amidst the moral, spiritual, and physical carnage. As one man says, consolingly, to another: "Although in these dark times of selfish fear it seems that goodness doesn't exist in our hearts, there are still good people. Maybe they are the minority, but those rare islands are the ones that make it bearable to swallow the oceans of shit formed by the armies of assholes that surround us." A rare moment of hope and optimism in an otherwise scabrous and coruscating portrait of humanity in a death spiral.