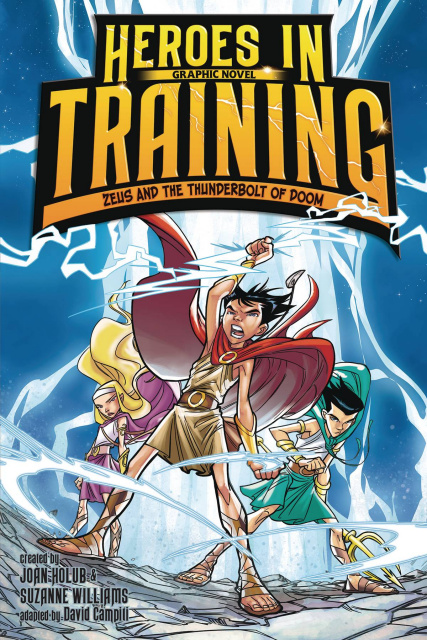 Heroes in Training Vol. 1: Zeus and the Thunderbolt of Doom

After pulling a magical thunderbolt from a stone, ten-year-old Zeus goes on the adventure of a lifetime in this first graphic novel adapted from the popular Heroes in Training series! Ten-year-old Zeus is mystified (and super-annoyed) by the fact that he keeps getting hit by lightning. Every. Single. Year. Still, it's by far the most interesting thing that happens to him. He's never been far from the cave where he grew up and is beginning to think he'll never have a real adventure. But Zeus gets his wish-and a lot more than he bargained for-when he is kidnapped by dangerous, giant Titans! In a scramble for a weapon to defend himself, Zeus grabs an actual thunderbolt from a stone. Its incredible power keeps the Titans at bay, and its mysterious markings lead Zeus on a quest to rescue his fellow Olympians from the evil Cronus.