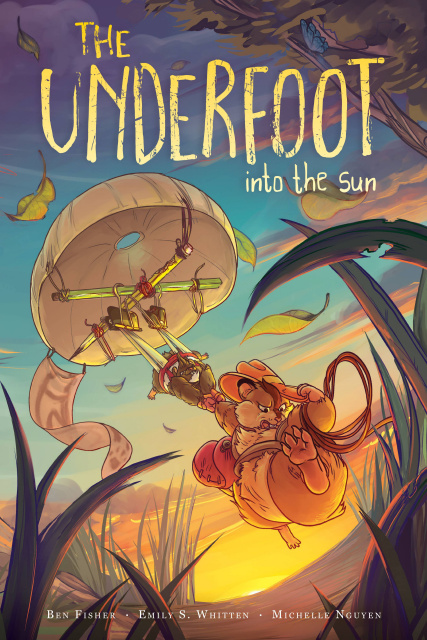 It has been untold years since the Giants-That-Were disappeared, leaving behind the animals forever changed by their strange science. Now, granted the gifts of intelligence and self-awareness, the valiant Hamster Aquatic Mercenaries and their new allies, the Hamster Airborne Paratroopers, struggle to keep their hordes alive in a dangerous world. In The Underfoot: Into the Sun, H.A.M. has joined forces with H.A.P., using their differing gifts and combined knowledge to explore new territory and aid "clients" with problems both on land and in the Great Wide above. After priceless Giants-That-Were artifacts vanish from storage and one of their allies is double-crossed by deadly "stingers," H.A.M. and H.A.P. find themselves at the center of a plot far more sinister than anything they've faced before. But it's not just supplies that have gone missing; hamsters have begun disappearing, too. The mysterious dots are finally connected when a third hamster colony arrives, bringing clues that reveal an insidious plan of annihilation by Hashak, leader of the "scales" and sworn enemy of the "fur." Soon, Hashak will use the Giants' deadly technology and the labor of kidnapped hamsters to complete her secret weapon. Will the three allied hamster hordes succeed in their most dangerous mission yet, or will everything-and everyone-they know succumb to Hashak's terrible scheme? Into the Sun, the second volume in the epic sci-fi series The Underfoot, is a fast-paced graphic novel full of daring escapes, heroic rescues, and devious cunning.