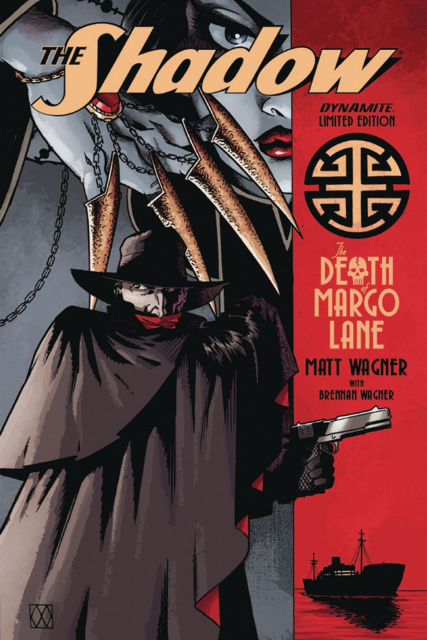 The Shadow: The Death of Margo Lane

A limited edition hardcover of The Shadow: The Death of Margo Lane, exclusively available from Diamond Comic Distributors!

Legendary creator Matt Wagner returns to both write and draw an all-new tale for the first and most famous of all pulp heroes, The Shadow! Following his critically-acclaimed work on The Shadow: Year One and Grendel vs. The Shadow, Wagner once again lends his masterful talents to unveil "what evil lurks in the hearts of men", joined by talented colorist Brennan Wagner. For years, Margo Lane has served as The Shadow's faithful friend and companion, the closest and most intimate of all his many agents. But when will that proximity to The Shadow's dark and violent world take its ultimate toll on her? And what effect will his lover's loss have on the driven and brooding Master of Darkness? A powerful and resonant tale in the sort of pulse-pounding pulp style that only Matt Wagner could deliver! Also includes Matt Wagner's eight-page story from The Shadow #100.

"Matt Wagner excels at pulp. While other authors have gone down the road of making use of the tropes - modernizing it, using it ironically, sticking elements of it in different genres - Wagner comes across as though he's traveled to modern times from the era in which it was birthed." -WeTheNerdy.com

"Wagner creates a world that feels real and then populates it with characters, no people who are real as well." -Comic Bastards