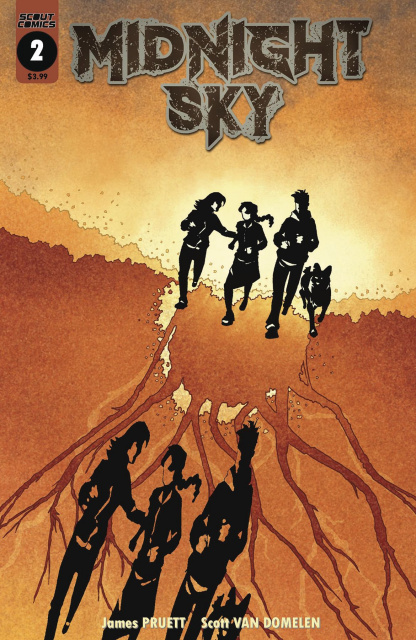 Fresh from the pages of Scout Presents: Midnight Sky Free Comic Book Day, MIDNIGHT SKY is Invasion of the Body Snatchers meets They Live. For over a decade the world has been at war with an invisible, secret enemy that is undetectable because they look like everyone else. What would your friends do or say when they discover that your children aren't what they appear to be? While being terrorized by military changelings searching to capture hybrid children for experimentation, Jennifer finds herself in this dilemma when her son Alejandro's true identity is revealed to her fellow survivors horded up in their refuge in a former bank in south Tampa. To make matters worse, her daughter, Elita, a half-breed decides to take matters into her own hands and the results are cataclysmic. Enter the world of the MIDNIGHT SKY where the sunlight has long since faded behind an impenetrable atmosphere leaving only the eternal darkness behind and your best hope for survival is to trust no one. Featuring two covers by series artist Scott Van Domelen, including an Invasion of the Body Snatchers homage.