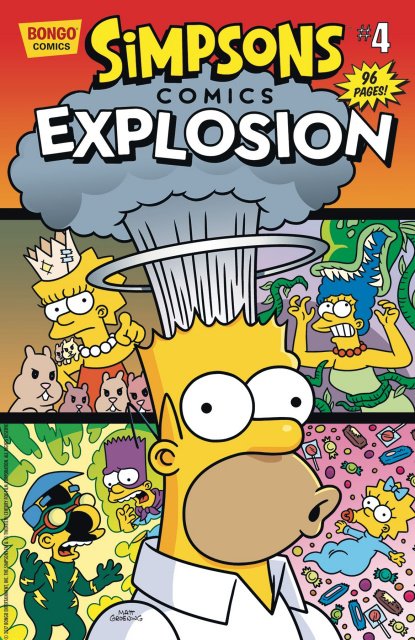 Bongo's annual, oversized, 96-page comic offers even more bang for the buck this fall! After a run-in with the paparazzi, Krusty the Clown hires Homer to stand in for him, or rather, stand next to him... because Homer makes Krusty look good by comparison. Then, Professor Frink's newest invention, a cell phone that can give its owner superheroic abilities falls into the hands of Bartman's sidekick Houseboy (aka Milhouse), transforming him into a very, very, bad boy! And when Homer takes an impressionable Ralph Wiggum under his wing, it doesn't take long before Bart gets jealous and wants in on the father/son/extra son relationship. Later, Homer and Bart team-up to protect the nuclear power plant from a zombie invasion in "Power Plants Vs. Zombies"!