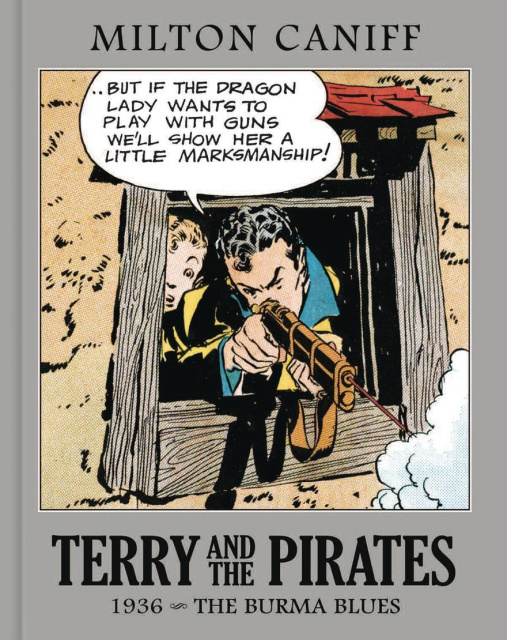 Volume 2 of this landmark series-reproduced from Milton Caniff's personal set of color syndicate tabloid proofs-features the iconic 1936 daily and Sunday adventures, which continue their separate paths until the end of August when the stories-and cast of characters-are happily united once and for all.

In the Sunday Saga, Pat and Cap'n Blaze have it out across a checker board! Then things get really hot when the Dragon Lady and her men lay siege to Blaze's encampment!

A twist of fate puts Pat in charge of the Dragon Lady's forces, but they're mistaken for soldier-of-fortune pirates when the Chinese Army storms their position. It takes timely intervention from a surprising source to gain their freedom.

Meanwhile, in the Daily Saga, fists fly when Terry, Connie, and Pat are taken prisoner by the insidious Captain Judas-and sparks fly when the boys have their first meeting with beautiful, blonde Burma! The famous strips from March 16-21 steamed up the national audience and became one of the most imitated sequences in comic strip history. Later, cat claws are unsheathed against the backdrop of plague on the planation run by Stan and Wendy Wingate, Burma takes a dive, and with the daily and Sunday strips integrated into a unified storyline the boys once again confront the Dragon Lady before running afoul (accent on the foul!) of Papa Pyzon.

The Library of American Comics and Clover Press are proud to publish Terry and the Pirates: The Master Collection, the ultimate edition of Caniff's masterpiece. We present the Sundays in an unmatched color fidelity and larger than they have ever before been reprinted-an unparalleled upgrade that no Terry fan can afford to pass up.