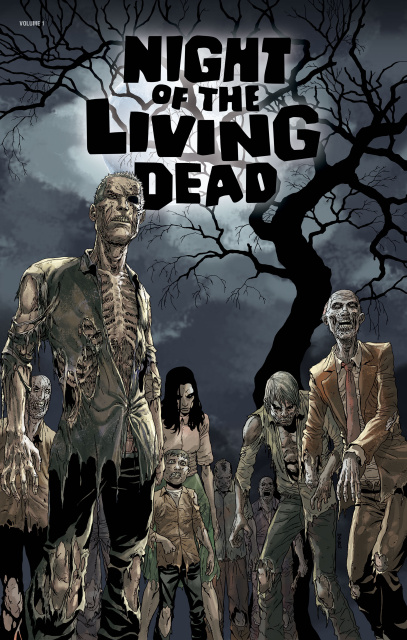 The zombie series fans have long-demanded is collected for the first time! All eight issues of the fully-authorized series of color comics are included here along with a horrific cover gallery! This is the story everyone was dying to see: a prequel to the original film from the original creator and script co-writer John Russo! Written by Russo and Mike (Gravel, Wolfskin) Wolfer this is the horror series of the decade from the men who defined the genre! We heard the eyewitness accounts and were shocked by the television news reports, but now for the first time we will experience the horrifying events which led to that first Night Of The Living Dead! A strange mist brings the unburied dead back to life, hungry for the flesh of the living! There is nowhere safe to run and no one could possibly prepare for the onslaught of the ghouls, thirsting for human blood! This incredible prequel to the blockbuster classic 1968 NIGHT OF THE LIVING DEAD film gives new insight into many of the film's characters and locations, including horrific encounters at the farm house and Beekman's diner and introduces us for the first time to The Cemetery Zombie, Sheriff McClellan, the zombie girl Karen, and NOTLD hero, Ben! This terror tome is available in two editions with covers by Jacen Burrows, a soft cover and a limited Signed Hardcover featuring the signatures of original screenplay and series creator John Russo, co-writer Mike Wolfer, and cover artist Jacen Burrows that is limited to just 1250 copies!